“How hard can that be? Saying that Nazis are bad,” Obama said. But the Morning Joe desk didn’t point out that Obama’s Iran deal bankrolled a violent, anti-Semitic, Holocaust-denying regime. They also didn’t mention that Trump deported a Nazi — a Nazi that Obama did not deport.

“Boy, Barack Obama, you know, he once said ‘I’m LeBron, baby’?” Scarborough said. “He sure looked like Lebron when he was speaking. That was like an easy layup when he said, ‘How hard can it be to criticize neo-Nazis? It sort of puts you in the place where we are where it’s just surreal that Donald Trump has trouble even criticizing neo-Nazis and white supremacists.”

Scarborough did not mention that perhaps Trump refuses to elevate fringe elements of the alt-right by giving them oxygen, the way that Hillary Clinton’s 2016 campaign speech pleased white supremacists by giving attention to the tiny, disorganized group.

Scarborough called Trump “demented” and “twisted” and encouraged Obama to “Go there, and do what he needs to do.” Scarborough said: “Somebody’s got to do it because the Democratic Party does not have a voice of opposition. Barack Obama is that voice.”

MSNBC co-host Mika Brzezinski agreed, displaying further bias against Trump. She even used her children to illustrate her point.

“My daughters stopped talking to me about politics quite some time ago, because it was all too much and too negative,” Brzezinski said. “My phone lit up, both of them, during Obama’s speech and Snapchats and you know what, all sort of coming in because they were finally excited again, so that certainly says something.” 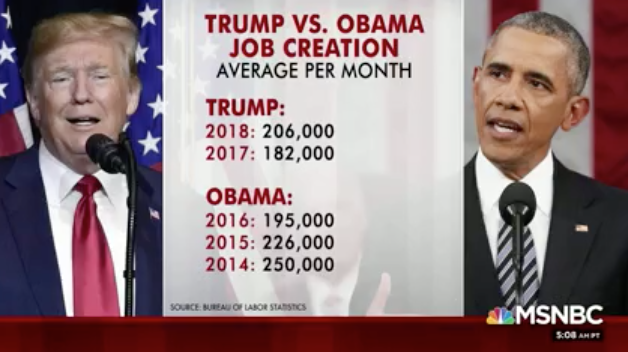 Morning Joe also engaged in an apples-to-oranges comparison on job creation during the first two years of Trump’s presidency vs the final three years of Obama’s presidency. By looking at the first two years of Obama’s presidency, we see job losses in nearly every month of Obama’s first year and additional losses during some months of his second year. While critics would argue that Obama inherited the economy during the financial crisis, Morning Joe failed to point out that Obama presided over the slowest recovery since the Great Depression.