A CNN reporter mischaracterized President Trump’s comments about whether the FBI should investigate the sexual assault allegation made against Judge Brett Kavanaugh.
After Trump’s brief remarks in the Oval Office, CNN’s Chris Cillizza tweeted, “No big deal: Just the President telling the FBI to ignore an allegation of sexual assault.”

No big deal: Just the president telling the FBI to ignore an allegation of sexual assault https://t.co/lvO8w9ccOm

Cillizza was responding to a tweet by CBS News White House correspondent Mark Knoller that didn’t say anything about Trump pressuring the FBI not to open an investigation into the allegation.

Pres Trump says he still hasn't spoken to Judge Kavanaugh, but says he knows he has @POTUS' support. Pres is critical of Dems and @SenFeinstein for handling of allegation against Kavanaugh. Says FBI doesn't want to reopen its background investigation.

In direct opposition to Cillizza’s claim, Trump said during his remarks he would support FBI leaders if they chose to open an investigation.

“I don’t think the FBI really should be involved because they don’t want to be involved,” Trump said during his remarks. “If they wanted to be, I would certainly do that.”

As the Department of Justice has noted, the purpose of a background investigation is to determine whether a nominee could pose a risk to the national security of the United States. It is not under the FBI’s purview to make any character judgment about the credibility or significance of any allegation.

CNN’s coverage of the Oval Office statement also misled viewers with its caption of the Trump’s comments, stating that he didn’t think the FBI should investigate Kavanaugh. 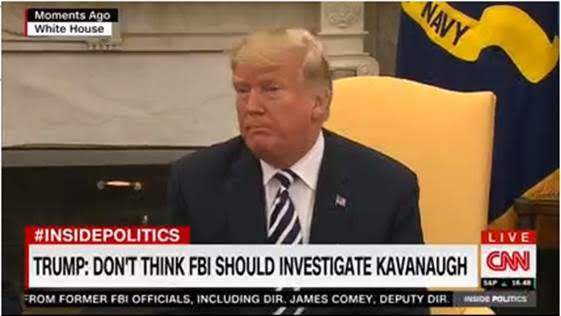 Later, in a joint press conference, Trump repeated that it was the FBI’s decision to not be involved, but “it wouldn’t bother” him if they were.