Burnett started her line of questioning with Sen. Kamala Harris (D-Calif.): “Ohio is one of several states that has banned abortions after as early as six weeks of pregnancy,” Burnett said. “Many women don’t even know they’re pregnant at that time. The Ohio law is being challenged in the courts and has not yet taken effect. Sen. Harris, if states prevail on restricting abortion, what’s your plan to stop them?” 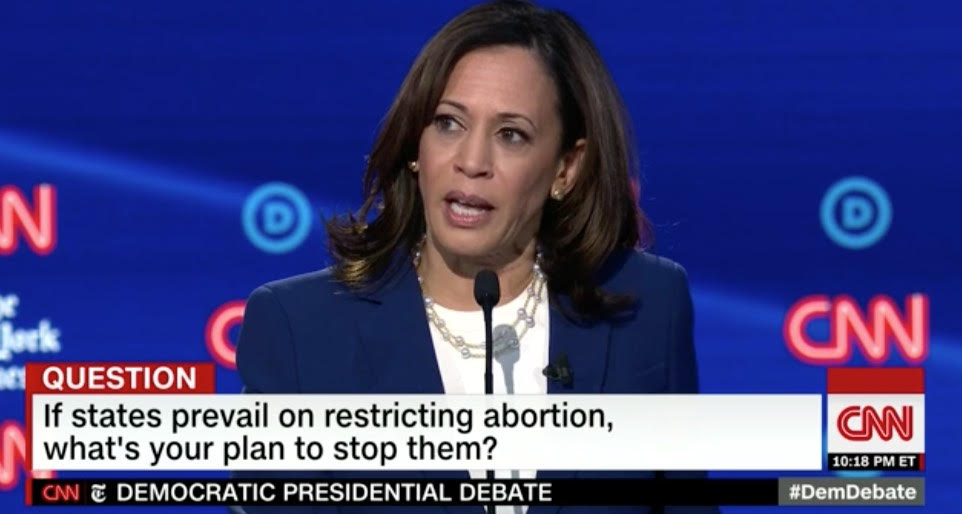 Burnett proceeded to probe additional Democratic presidential candidates, asking the same thing of Sen. Amy Klobuchar (D-Minn.): “Sen. Klobuchar, what would you do to stop states from prevailing? Your response?”

And again with Sen. Cory Booker (D-N.J.): “Senator Booker, if states prevail on restricting abortion, how would you stop them? Please respond.”

Burnett brought up a pending U.S. Supreme Court case (which has been litigated at other judicial levels with some courts supporting pro-life state measures), suggesting that if the legislative branch wouldn’t approve pro-abortion measures, would a President Joe Biden seek to engineer an executive branch high court-packing to achieve pro-abortion judicial rulings.

“The Supreme Court is currently made up of five Republican-appointed justices and four appointed by Democrats,” Burnett said. “The Court just announced it will hear arguments in a case challenging some abortion rights. Vice President Biden, the Constitution does not specify the number of justices that serve on the Supreme Court. If Roe v. Wade is overturned on your watch and you can’t pass legislation in Congress, would you seek to add justices to the Supreme Court to protect women’s reproductive rights?”